You can buy this “Religion – together we can find the cure” T-shirt from the Richard Dawkins Foundation store for just $22.95 and contribute to the spread of reason, rationality, and progress!

Last week during my journey back from Prague to Leipzig, where I live, I had a conversation with a German lady who was sitting opposite to me in the train. When I told her that I study religion, she remarked categorically that religion for her is nothing more than a scam on a grand scale to rip people off and take their money away. It is not surprising to hear such a view from a person who grew up in East Germany—the most godless place on Earth—and it is arguably an opinion that is shared by many atheists around the world, including the neo-atheist “saint” Richard Dawkins:

Imagine a world with no religion. Imagine no suicide bombers, no 9/11, no 7/7, no Crusades, no witch-hunts, no Gunpowder Plot, no Indian partition, no Israeli/Palestinian wars, no Serb/Croat/Muslim massacres, no persecution of Jews as ‘Christ-killers’, no Northern Ireland ‘troubles’, no ‘honour killings’, no shiny-suited bouffant-haired televangelists fleecing gullible people of their money.

I am not writing here to argue against such a view of religion. It is true that many preachers, clerics, and religious organizations collect money from people dishonestly to enrich themselves, although I believe a lot of the money raised via religious channels is used for fair and charitable purposes. I would like, however, to point out that atheism too can be converted into a scamming enterprise, and Dawkins is apparently doing just that.

Today I have read an article with the title “The bizarre—and costly—cult of Richard Dawkins,” which claims that Dawkins offers members of his foundation, which is allegedly dedicated for “reason, science and progress,” some “valuable” benefits such as the chance to meet him in person! However, this privilege is not available to ordinary members. Membership is organized hierarchically in circles—depending of course on how much money you pay for his “non-profit” organization—called the “Dawkins Circles”. The “Reason Circle,” which is the cheapest option, costs $85 monthly and offers you discounts on merchandize from the foundation store, such as this cool T-shirt above, and the chance to attend events with “Richard Dawkins Foundation for Reason and Science personalities.” However, $85 a month is too little for the karma you gain from having a private lunch with the “Holy Prophet” himself. Such a privilege is reserved for members of the “Evolution Circle” or “The Magic of Reality Circle,” which cost, again according to the article cited above, $100,000 – $500,000 annually.

At first I thought this article, which is published on The Spectator, to be satirical, especially that today I had read a satirical piece about Dawkins in The Daily Mash titled “Dawkins now just telling random strangers why he hates them.” When I failed to see any indication that The Spectator is a news parody website, which to my ignorance turned out to be a prominent British conservative magazine, I went to the official website of the Richard Dawkins Foundation to search for any clues about the “Dawkins Circles.”

What I have found, to my surprise, actually confirms The Spectator’s article. If you look at the screenshot below, you can see clearly that one of the benefits of the “highest membership level” is to have a private lunch with Dawkins. The membership section of the foundation website, however, mentions only three levels of membership (“Reason,” “Science,” and “Darwin Circle”), but none of them includes the “sacrament” of sharing a private meal with Dawkins, which suggests that are higher membership options but they are not shown here for whatever reason. [UPDATE: Apparently the highest level of membership is called the “Dawkins Circle,” and so it is above the “Darwin Circle,” which suggests to me that Dawkins somehow sees himself above Darwin.]

A screen shot from the homepage of the Richard Dawkins Foundation

I don’t think it is difficult to see the incongruous nature of what Dawkins is doing. He accuses Televangelists of “fleecing gullible people of their money,” yet he does not shy away from duping “gullible” atheists into paying hundreds thousands of dollars to have the “honor” of dining with him. It seems that he is making good deal of money from his atheist activism. According to the The Richest, The Sunday Times estimated his net worth in 2012 to be around 135 million dollars, which is comparable to the net worth of some of the richest Televangelists around the world.

Atheists, it seems, are not immune to being scammed just like the followers of any other creed, religious or not. In fact, atheism seems to reproduce many of the characteristics of religion, both good and bad, against which it defines itself. A notable example is the so-called “Sunday Assembly,” where atheists gather to perform Christian-like ceremonies and rituals. This is perhaps why much of recent research points toward classifying atheism as a form of religion or belief rather than the lack thereof.

Another common characteristic of religion and atheism is disposition toward fanaticism and intolerance of different opinions. The fanaticism of Richard Dawkins and the like has been aptly satirized in the cartoon series South Park. In the 13th episode of the 10th season, Go God Go XII, a member of the Unified Atheist League (one of three atheist organizations engaged in an ideological war in the 26th C.) says describing Dawkins, “Using logic and reason isn’t enough: You also have to be a dick to everyone who doesn’t think like you.” 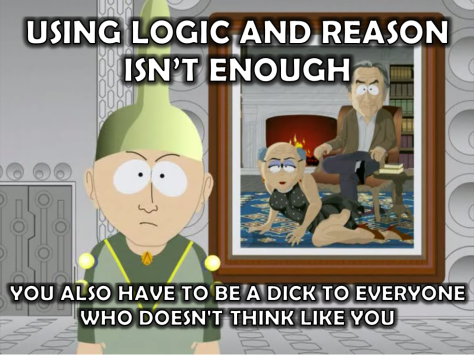 In “Go God Go XII” Dawkins free the world of religion with the help of his wife Mrs. Garrison (formerly Mr. Garrison), but atheists subsequently enter into war over the correct answer to the so-called “Great Question.”

I think the message from South Park and other critics of Dawkins is clear: gullibility, dishonesty, fanaticism, personalty cults, and all other negative features that we usually attribute exclusively to religion can very much be found with the followers of any other creed.

2 thoughts on “Not only religion, but atheism too can be used as a scam – Dawkins as an example”