Iconoclasm is back! Angry mobs of puritan zealots are storming the streets of various cities, toppling statues and tearing images apart. No picture is too sacred for their axes, which are set to erase any blasphemy from the face of the earth.

Admittedly, this opening sentence is an overdramatization of recent attacks on statues and monuments in the aftermath of the gruesome killing of African American man George Floyd by a white police officer in Minneapolis, Minnesota in the United States on May 25, 2020. It is, furthermore, inaccurate in its characterization of these acts as a form of iconoclasm, which is—in the strict meaning of the term—the destruction of statues and pictures set up as objects of religious veneration.

The term iconoclasm (from Greek, meaning ‘breaking of icons’) stems from Byzantine history, which witnessed over the 8th and 9th centuries a series of controversies over the status of icons in Orthodox Christianity. On one side of this debate were the iconoclasts, who wanted to revive the Judaic prohibition against images (as in the Ten Commandments, “Thou shalt not make unto thee any graven images”) and prohibit thereby all religious iconography. Their opponents, the iconophiles, on the other side, asserted that the incarnation of the God in human form (Jesus Christ) had made this prohibition obsolete. The second major wave of iconoclasm in the history of Christianity occurred in the 16th century in the aftermath of the Protestant Reformation. Radical reformists in Switzerland, the Netherlands, and England—the “Wahhabis” of that era—attacked churches and public building, destroying any figural images they could lay their hands on, including images of Virgin Mary, Jesus Christ, and even the crucifix.

A furious Moses destroying the Gloden Calf, which was an idol made by the Israelites during his absence in Mount Sinai. Source: Wikimedia Commons

A scene from the film Cromwell (1970) about Puritan English statesman Oliver Cromwell (1599-1658), depicting him in an act of iconoclasm

Iconoclasm is not limited to Christianity. Waves of iconoclasm have occurred within many other religions, including Buddhism. However, iconoclasm has mostly been associated with the monotheistic God—the God of Judaism, Christianity, and Islam. Paradoxically, while the monotheistic God is perceived as omnipotent, he appears to be excessively “jealousy” of any image or statue, no matter how small or insignificant. In fact, it seems that the more God is perceived as all-powerful and beyond all human comprehension, which is usually how He is perceived by iconoclasts, the less He is tolerant of any images. The mere presence of images, even when not venerated, may cause him to unleash his wrath upon humanity indiscriminately.

This wrath is usually unknowable to human beings, especially those who do not believe in Him. It manifests itself though in the excessive zeal and moral supremacism that His iconoclastic followers exhibit, as they storm places of worship and other buildings to cleanse them of any figural representations. They rarely, I would imagine, ask “idolatrous worshippers” nicely to stop venerating images and dispose of them in a respectful manner. At least this is how they were represented in historical records and paintings such as those displaced below. I must confess though that the images of image­-breakers were probably made by image-lovers, who might have overlooked the instances when the iconoclasts showed due courtesy while enforcing the commandments of their vengeful and jealous God. Regardless, it is hard to do without the popular image of iconoclasts as mobs of angry fanatics smashing statues and tearing images apart.

A collection of depictions of acts of iconoclasm by radical Protestants (16th C). Source: Wikimedia Commons. The outbreaks of iconoclasm during the Protestant Reformation became known as Beeldenstorm (Dutch for “image storm”)

The overdramatization and the deliberate inaccuracy in the opening paragraph of this post notwithstanding, it is not a bad idea in my opinion to look at the destruction of statues in recent protests against racism from the angle of iconoclasm, which is the primary subject of this post. But before doing that, I would like to tell you a little story about myself and how I felt about statues associated with colonialism and other forms of oppression before recent protests.

I am originally from the Middle East (Syria specifically)—a region that has had its fair share of European colonialism starting from the 19th until the very recent past. Having lived in Europe for almost 13 years, during which I have visited many of its major cities, I must have come across countless statues of monarchs, military commanders, and politicians who were in one way or another implicated in European colonialism. Yet I do not remember I have ever thought I would love to see this or that statue toppled down, except for one instance back in the summer of 2017. 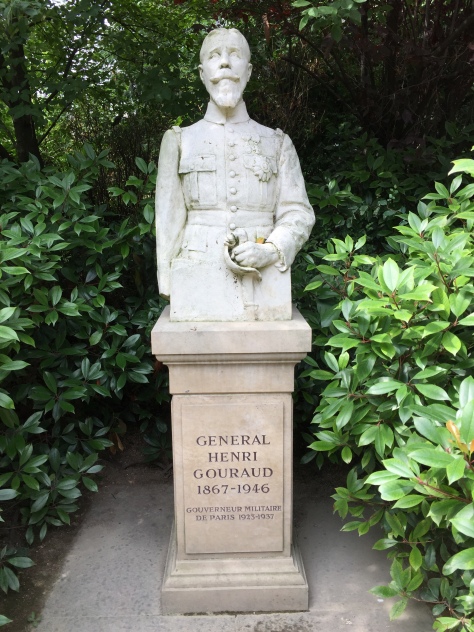 The statue of General Gouraud in Square d’Ajaccio in Paris. Source: my own photo

on July 13 of that year, I was passing through Square d’Ajaccio in Paris, just around the corner of the Army Museum, when I saw by chance a statue of General Henri Gouraud (1867-1946). Gouraud has an ill reputation in my native country Syria, because he led the French “Army of the Levant” that invaded Syria in July 1920 (exactly 100 years ago), abolishing thereby the short-lived Arab Kingdom of Syria, which had been declared few months earlier. In particular, he is infamous for his role in the Battle of Maysaloon (July 24, 1920), when his army routed a small contingent of ill-equipped Syrian soldiers and civilian volunteers led by the then Minister of War Yusuf al-Azma just west of Damascus. Al-Azma defied the orders of his government and refused to surrender to Gouraud without a fight, even though he must have been well aware that it was a losing battle. This heroic act of defiance, for which he paid with his own life, immortalized him as a national martyr of Syria.

As you might guess, it was not a pleasant surprise for me to encounter a statue honoring a person who is in the view of many Syrians a brutal and arrogant colonialist. What made me angrier, perhaps, is that the inscription underneath his statue made no mention of his colonial service, which, besides Syria, included many countries in West and North Africa. It only identified him as the “Military Governor of Paris (1923-1937)”. I did not do anything to the statue at the time, but I do remember fantasizing about destroying or desecrating it. If I were in Paris now, I may very well act differently.

Consequently, I perfectly understand that some people would like to see statues associated with slavery and colonialism smashed into pieces. If for every country, region, or ethnic group that suffered at the hands of European colonialism and white supremacism a statue or two were to be toppled down, I think European cities would be emptied out of half of its monuments, if not more. Having said that, I must admit I feel uneasy about some of the acts of political iconoclasm that we have witnessed over the past four weeks.

First of all, I would like to affirm that, as far as moral legitimacy is concerned, one cannot make a sweeping generalization about all acts of political iconoclasm. Some are perfectly legitimate, even admirable, with little room for moral ambiguity. Others, however, might seem unwarranted, difficult to comprehend, or simply bizarre. At the legitimate and admirable end of this spectrum, in my view, are instances when demonstrators in a country ruled by a dictatorship attack the symbols of their oppressive regime. The best and most recent examples of such type of political iconoclasm happened during the Arab Spring, when demonstrators literally risked their lives by destroying the statues and pictures of Arab dictators. In this case, the oppressed (not their descendants nor white people acting in their name) attacked the symbols of their oppressor, who is still alive, kicking, and oppressing.

Egyptian demonstrators in Alexandria tearing down an image of dictator Husni Mubarak on January 25, 2011—the first day of the popular uprising that brought him down three weeks later

Another target of legitimate political iconoclasm, in my opinion, are symbols of the Confederacy in the United States. Confederate leaders have no claim to fame other than defending slavery. None of them, as far as I could tell, discovered an unknown continent, laid the foundations of a democratic state, developed a philosophy of peaceful resistance, or helped defeat Nazis. Confederate monuments, moreover, are not only bad because the individuals they represent were bad but also because of the time and the purpose for which they were created in the first place. Most of them were erected during the Jim Crow era in reaction to the emancipation of black Americans. In other words, their presence is part of an ongoing effort to maintain white supremacy over ethnic minorities in American society.

Moving away from this end of the spectrum we start to encounter cases that could be, with varying degrees, subject to debate or different moral interpretations. Christoph Columbus and Winston Churchill, for example, both committed horrible acts that range from genocide through slavery to colonial oppression, yet at the same time there might be certain things to admire about them. Undertaking the first voyage that crossed the Atlantic Ocean is a historical event and a remarkable feat of human exploration that is perhaps no less significant than landing a human being on the moon. Could we separate Columbus the explorer and the adventurer from Columbus the brutal colonial governor? Could a monument be a celebration of the former without the latter? I think these are legitimate questions to discuss and debate, and I can imagine that there might be some room for different opinions in this regard.

Moving further along the spectrum we encounter someone such as George Washington, who was implicated in one of the evils of his society, namely slavery. However, unlike Columbus, who immersed himself more or less willfully in the evils of his time, Washington questioned slavery and ordered in his will the freeing of his slaves. We must also not forget that Washington was the leader of a revolution and a co-founder of a new state—acts that invariably entail making moral as well as political compromises.

As we move closer to the other end of the spectrum of political iconoclasm, we reach the case of the Mahatma Gandhi, whose statues have been removed or subject to demands to be removed on the grounds that Gandhi was racist toward black Africans. Gandhi, who lived in South Africa and worked as a lawyer for 21 years (1893-1914), apparently expressed prejudice against black people, whom he occasionally described using derogatory terms during his early years there. Gandhi was an imperfect human being—a species in which perfection, as of now, has not yet been documented. Nonetheless, he developed a political philosophy of peaceful resistance against oppression that inspired peaceful activists across the Globe, including the country where Gandhi committed the sin of racism: South Africa. Nelson Mandela himself acknowledged the influence of Gandhi on the development of his peaceful struggle against the racist system of apartheid. However, a group of students at the University of Manchester reckon that they know better about racism than Nelson Mandela, who spent more time in solitary confinement for fighting racism than these students spent on the face of this planet. 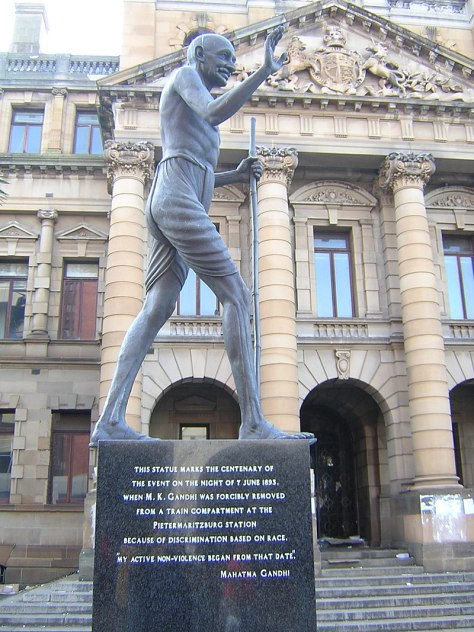 A Statue of Gandhi at the city of Pietermaritzburg, South Africa. The statue was unveiled by Desmond Tutu, another anti-Apartheid activist and Nobel Peace Prize laureate who apparently needs lessons in anti-racism from these students at the University of Manchester.

[This is the end of part I of this post. In the next part, I will list few reasons why I felt uneasy about the destruction of some statues in recent protests against racism.]

One final note—the title of this post is a reference to the very first black metal album that I owned Puritanical Euphoric Misanthropia by Norwegian band Dimmu Borgir: